‘Geometrical’ and ‘Gaz-grid’ Analyses of the Sheesh Mahal (Lahore Fort) 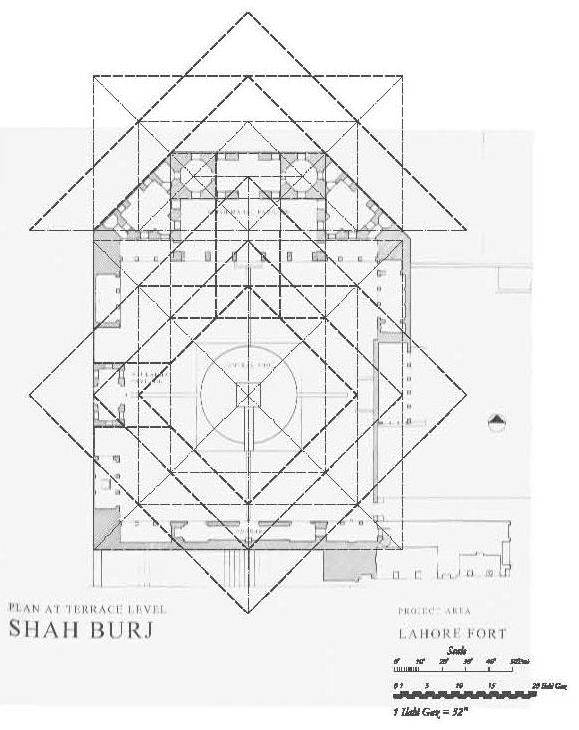 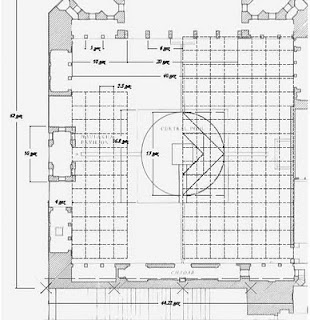 Extract from:
In Search of the Time-less in Architecture

Figs. 15 & 16 show the ‘Geometrical’ and ‘Gaz-grid’ analyses respectively, of the Sheesh Mahal built by Shah Jahan in the Lahore Fort in 1630-31 AD. The Geometrical Analysis (fig 15) shows that all the main divisions of the plan are derived from a series of rotating and inscribed squares.
In the Gaz-Grid Analysis shown in fig 16 the grid is of 2.5 gaz. The over-all length 62gaz; the width of the court 40gaz; the central Veranda of the Sheesh Mahal 20gaz; the side double storey verandas 10 gaz; the inter-columnar distances for the two verandas 6gaz and 3gaz respectively; Length of the Naulakha Pavilion in the West 10gaz, the round portion of the central pool 13gaz.

Thus once sees that the design of the building utilises two processes simultaneously, namely ‘geometric’ and ‘analytical’.[1]
The design was first drawn more or less theoretically, according to geometric proportions. Then, the analytical process was applied, and one dimension within the design was selected as a module. This module would be equal to, or commensurate with the gaz.[2]

i realy like ur blog i read it and follow ur future posts. you should also try this Interior Designers in lahore for the best designs