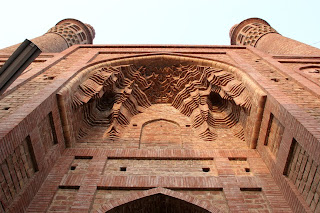 The first Muqarnas executed on a KKM project was at the entrance Iwan of Hafiz Mohammad Iqbal & Baba Hasan Din Mazars project in 2005 ( Image on left) . The plans were made from an Iranian handbook by Architect Shabir Hussain (now working in Quetta) while the 3-D studies were done by Hans-Christian Karlberg from Belgium, who was interning at the office at the time. (For more images of this project visit: http://kamilkhanmumtaz.com/index.php?option=com_content&view=article&id=59&Itemid=63).

Also see: Hans-Christian Karlberg's page for some glimpses of his time at the KKM office at: http://www.hck.be/hck.swf under projets > architecture > Mumtaz [internship].

Recently Kamil Sahib has been studying and analysing this form and has developed some original prototypes. Below left: drawings by Kamil Sahib and a model by Hisham, 3rd yr architecture student at Punjab University. Below Right: A constructed version at an on-going residential project off Bedian Road. 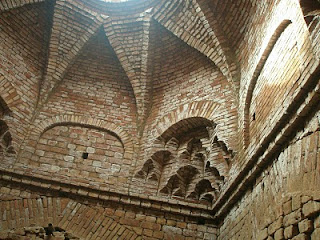 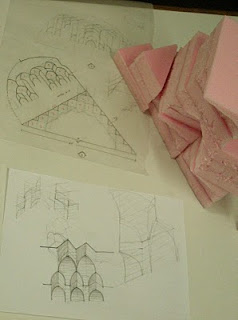 In parallel the more traditional Iranian type Muqarnas has also been employed at the Sally Town Mosque and at a Holiday Retreat named 'Bagh-e-Arifin' at Wah Village. Below left: 3-D model by Architect Fatima and Below Right:a box-board model by an internee Fatima from UET's Structural Architecture Department last summer. 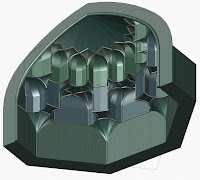 For a constructed example of the above Muqarnas see: http://kamilkhanmumtaz.blogspot.com/2010/04/muqarnas-at-sally-town-mosque.html

For a wonderful web data-base on Muqarnas see: http://www.tamabi.ac.jp/idd/shiro/muqarnas/default.htm
Posted by Kamil Khan Mumtaz Architects at 5:11 AM