Study-Model by
Architect Hassan Bin Tariq (2009 NCA)
for developing a louvered metal-grill for a
South-West facing (38 deg) window
for a KKM project in Lahore. 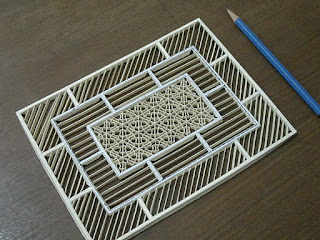 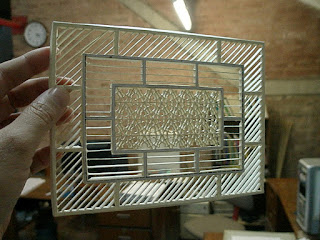 Posted by Kamil Khan Mumtaz Architects at 12:35 AM No comments: 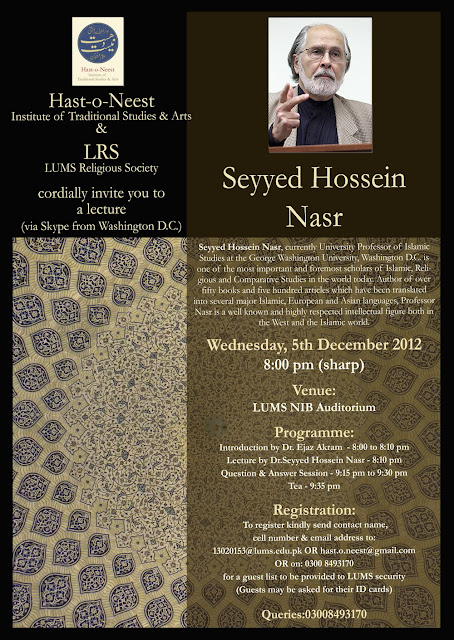 Posted by Kamil Khan Mumtaz Architects at 3:37 AM No comments:

A 10-day workshop conducted by Taimoor Khan Mumtaz, was organized by the History Group of the Department of Architecture and Planning NEDUET from 6th till 16th February, 2012. This was the third in the HG Workshop series.

This year’s workshop was special on many counts. In the previous two years the workshops had been mainly focused on learning the vocabulary and drawing methods of elements of Islamic Architecture, ending in fabrication of life-sized elements, but in non-architectural materials – card-board and polystyrene respectively. But this year the focus of the workshop was equally divided into the elements or vocabulary on the one hand and the process and materials of construction on the other.

The premise for this year’s workshop was the observation that in traditional architecture one sees a balance of two key qualities. One set of qualities derives from the art of architecture itself i.e. from sound building practice and building construction solutions according to the material of construction used. The other set of qualities derives from the consistent application of a coherent aesthetic system which aims to achieve harmony and beauty in the spaces and surfaces it creates.  This last is in its turn based on the philosophy of Islamic art which was the third main element of the workshop.

An example of the first set of qualities is the solution to the problem of roofing a square room with bricks. This results not only in domes but also in a variety of ways to solve the problem of transitioning from the cube of the room to the sphere of the dome. Thus the participants saw in their field visit to Makli and Thatta that the whole vocabulary of brick architecture of this region results in part from purely building construction solutions.

One of the aims of the workshop was to focus on this first set of qualities i.e. those resulting from the way a building is put together. An appreciation of this aspect of architecture  is sorely missing in architectural education in Pakistan and is therefore reflected in the unconvincing and 'cardboard' architecture we see so often around us.

Lastly we are also heirs to a long building-craft tradition which again finds no place in our architectural education. Hence the workshop included the active participation of Ustad Javed Chohan a hereditary master-mason from Karachi and his team of masons.

Posted by Kamil Khan Mumtaz Architects at 5:22 AM No comments:

Email ThisBlogThis!Share to TwitterShare to FacebookShare to Pinterest
Labels: Workshops 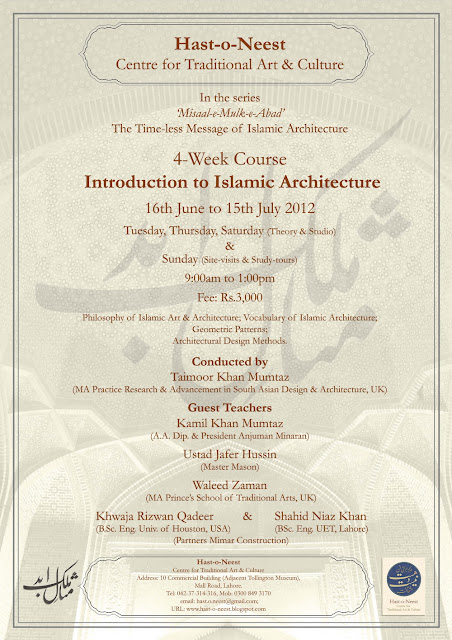 Posted by Kamil Khan Mumtaz Architects at 9:49 AM No comments:

From the Archives: KKM Project in 'The Economist'

'Echoing down a winding stairwell, a scraping of masonry and clink of chisel on marble signal a remarkable monument rising. It is in the scruffy Lahori suburb of Baghbanpura, where Iqbal lived for six decades. From a narrow alley running alongside the shrine, it is mostly hidden: its high outer walls, of recessed brickwork speckled with multicoloured tiles, rising out of sight to a pair of domes and skinny minarets. A few steep steps lead into a small cloistered forecourt, where masons are at work.

Either side of the forecourt, about ten metres apart, are two false burial chambers. These are beautifully decorated, with white marble lattice and marble mosaics studded with green jade, lapis lazuli and agate. One is for Iqbal and the other for his mentor, a mystic called Baba Hassan Din, who lived in a brick cell on this site and died in 1968. The men’s true graves lie underneath, in brick-walled chambers, faintly murmuring with the sounds of the street outside.'

﻿
Posted by Kamil Khan Mumtaz Architects at 7:53 AM No comments:

Click here to go to Article
'... the first question is not: are we today capable of producing patterns of this sophistication? With our tools, we had better be, this and beyond. The more important question is: are we today capable of a process of aesthetic design refinement carried this far -- in which the specificity of intent drives the tools, as opposed to the tools filling an absence of specific intent? '
﻿
﻿ ﻿ ﻿ ﻿
﻿﻿
﻿﻿ ﻿
﻿
﻿
﻿ ﻿ ﻿ ﻿
Posted by Kamil Khan Mumtaz Architects at 9:58 AM No comments: